Sometimes you just sit down to paint your nails with no real idea what you're going to do. You just look at your polishes til something jumps out at you and then you go with it.

When I did these nails, Lush Lacquer's Mr.Bubble screamed out at me for some more love - it's such an awesome polish but I've only worn it once. I decided to layer it over white polish (which I'm realizing is my manicure base colour of choice) in a cuticle gradient. But once I did it it just didn't seem like quite enough. There didn't seem to be enough of a fade from cuticle to tips, so it looked like I just painted half my nails with glitter. Not the effect I wanted. So to give the cuticle area more impact I painted on a stripe of Essence Ultimate Pink and turned it into a ruffian.

It was only after I'd finished that I had the thought that someone seeing my hands from a distance might think I had some horrible cuticle infection because of the bright pink colour! LOL But I had lots of compliments at work so I guess that wasn't the first thing people thought when they saw them!

I think these turned out pretty cool and unique looking, I don't think I've ever really seen a manicure like this one! 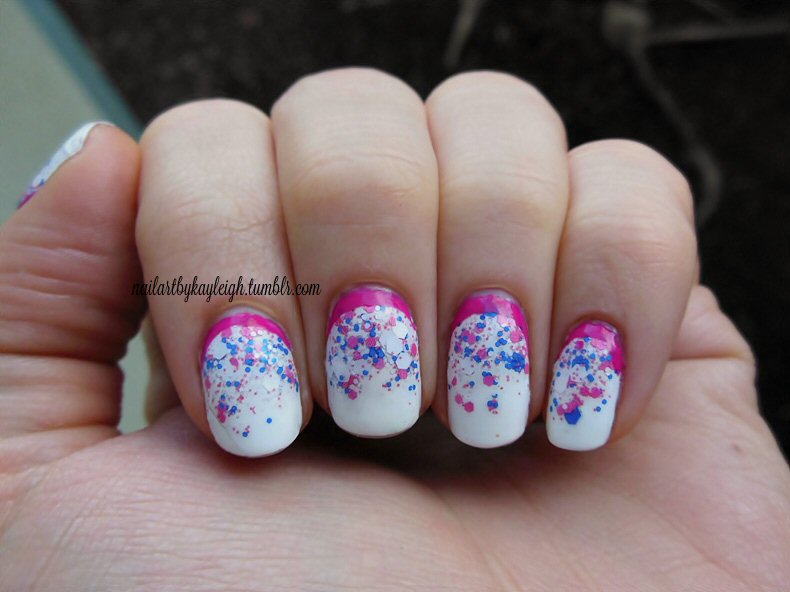