I figured it was about time I reviewed something to do with nails, considering all the nail polish posts I do!! This one is for a base coat/top coat combo I had been using!! And it illustrated quite effectively for me that even a decent product can go downhill with time... read on... 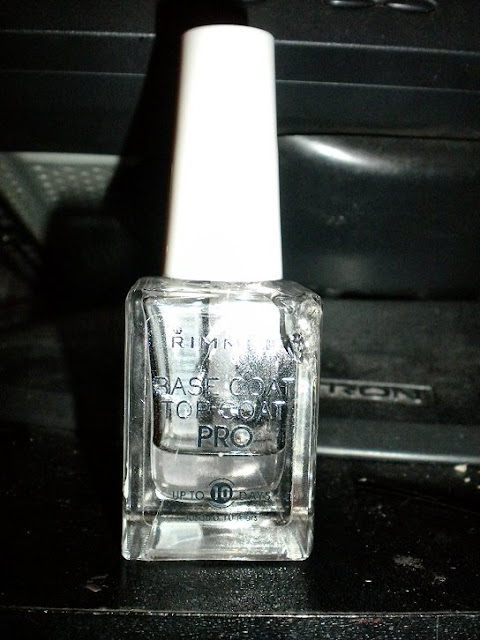 This stuff started out well enough, did pretty well what it was supposed to. But it was in the latter half of the bottle that things started to go south! I haven't had this for a very long time - I do my nails at least once but usually twice a week, and this is my base coat and top coat, so it hasn't had time to really "go bad". But still, it did... I noticed the last several times I used it that my nail polish was bubbling really bad. I thought it was one of the polishes I was using, but after doing several different manicures with all different polishes, I realized that it was this stuff that was doing it!! Not cool!!! So I can't say that I will be using it again!

I've just purchased a Sally Hansen base coat and top coat, not a combo this time but seperately. I read somewhere that it's better to have them seperate since really, they're supposed to be doing two different things. That made sense, so I think this will be my last attempt at saving money by doing a combo!! I painted a top coat of my new Sally Hansen Insta-Dry Anti-Chip Top Coat over my current mani, and so far it looks great! It actually made the bubbles almost completely disappear, so that's a bonus too! I was just about ready to scrap this manicure already!

Overall, my rating for the Rimmel Base Coat/Top Coat Pro is a 1.5/5. This might work for you at first, but don't expect to get through more than half the bottle before it goes sour on you!
Posted by Kayleigh at 18:18