*EDIT: Just wanted to add a little note here to anyone who happened to see the lovely little note someone left on this on Tumblr... I could let it get me down and make me upset, and to be honest at first I did. People don't realize, or choose not to realize, that when you say something mean and unnecessary online, you're not just saying it to no one - there's another person getting that message. Another human being. I find it sort of incredible (and incredibly disappointing) how easily people take the license to be cruel and pointlessly mean over the internet, simply because it's anonymous. I find that kind of behaviour just as sad in real life, but on the internet it also just comes across as... cowardly.

I do know however, that 99% of people who saw this manicure would see it for what it was meant to be - just a simple manicure that happened to be related, however loosely, to a good cause, a cause I wanted to bring attention to in some small way, and really I only tied this mani into the whole Autism Awareness thing because of Kimber's very moving blog post anyways... she had more to say about it than I ever could and I wanted to say, "I recognized that, I heard that, and I think you're very strong.", basically. That was what mattered and I don't intend to let negativity obscure that. I guess I can just finish up by saying I honestly wish a lot of future happiness for people like that... people tend to like to make those around them feel the way they do. Happy people try to spread happiness and make others happy, and miserable people... well, you get the point. The world would be better off if more people were happier, so if randomly attacking people you don't know a single thing about makes you happy.... carry on I guess.... let's see how well that works out for you.

I did this mani last night just wanting to try out this dot gradient design, and use one of the new Essence polishes I bought. I realized after I did the mani that because of the colour, it really fits perfectly with the all of the blue Autism Awareness manicures for the month of April that have been all over the polish blogosphere recently. Now, I don't want to pretend that this was pre-planned because that wouldn't be honest - I only noticed the connection afterwards. And there isn't much I can say on the subject except that I agree, there needs to be more awareness about this, and about many, many issues. People just need to be more aware of the world around them in general - it would make this world a better place to live in.

On the subject of Autism specifically, I want to point you to this great manicure and touching story that Kimber of Kimber's Lacquer Korner posted today, about her daughter who is on the Autism Spectrum. If anything about my manicure even unintentionally causes someone to be more aware and informed about Autism, then that's fantastic - but this woman has a true purpose and a true connection to the disorder and you should all read her story (and check out her awesome mani!).

Anyways, without further ado this is my accidental Autism awareness manicure that I created last night. I've been wanting to try a gradient manicure with polka dots for a while - simple, but striking design. 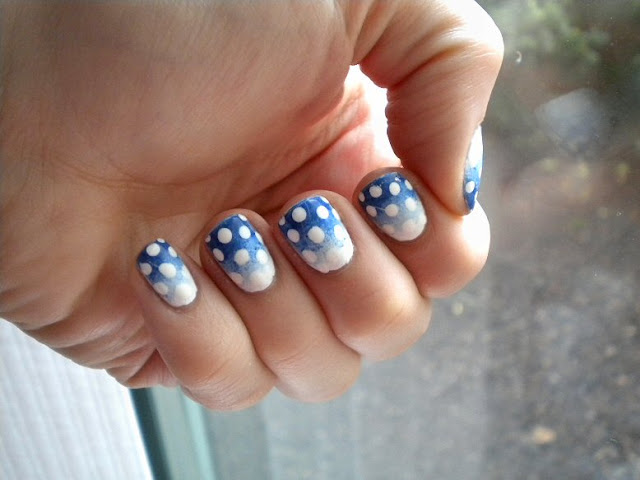 Colours used:
Essence in Walk on Air
Sally Hansen Insta-Dri in Whirlwind White
(in between colours on the gradient were mixtures of the two polishes)
Posted by Kayleigh at 11:54