NOTD Nov 7/11 and the joy of homemade nail decals!

This is a manicure that took a couple of attempts, but once I employed a new technique, it all came together!

I had tried doing this freehand on my nails but aspects of it would not turn out right, particularly the stripes - they looked lumpy and uneven and slanted very noticeably! Overall they just were not what I had envisioned in my mind - and this manicure came to me in a flash of inspiration that just about knocked me over, and I was so excited to make it happen - so it had to be right! 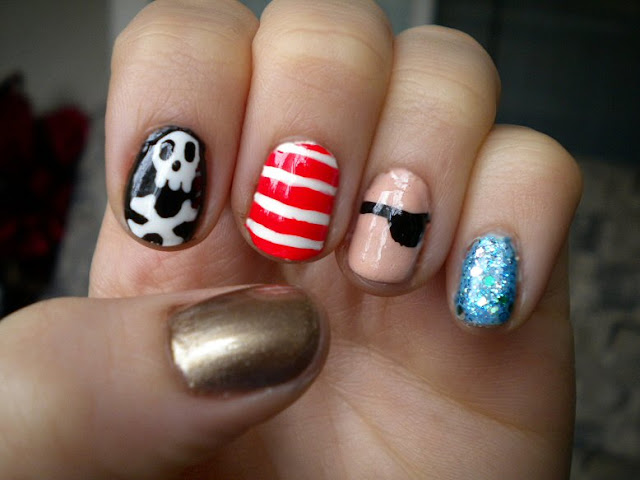 From thumb to pinky: pirate's gold, skull and crossbones, pirate-style stripes, an eyepatch and the ocean!

So for my second attempt, I decided to use the homemade nail polish decal method. Here's a great Nyan Cat nail art video tutorial by cutepolish that shows the method. For this mani I made decals for the entire middle finger, the skull and crossbones and the eyepatch. I painted each nail with a coat of polish (black under the skull and crossbones, white under the stripes and nude under the patch) and while it was still wet, placed it over the nail and gently smoothed down the edges with a pair of tweezers. The decals that weren't the full size of the nail did have visible edges but they completely disappear once you add topcoat!

So, your end result is a super cool mani that requires no left-handed trickery or holding your hands at awkward angles! Voila! Hope you likey!
Posted by Kayleigh at 11:09